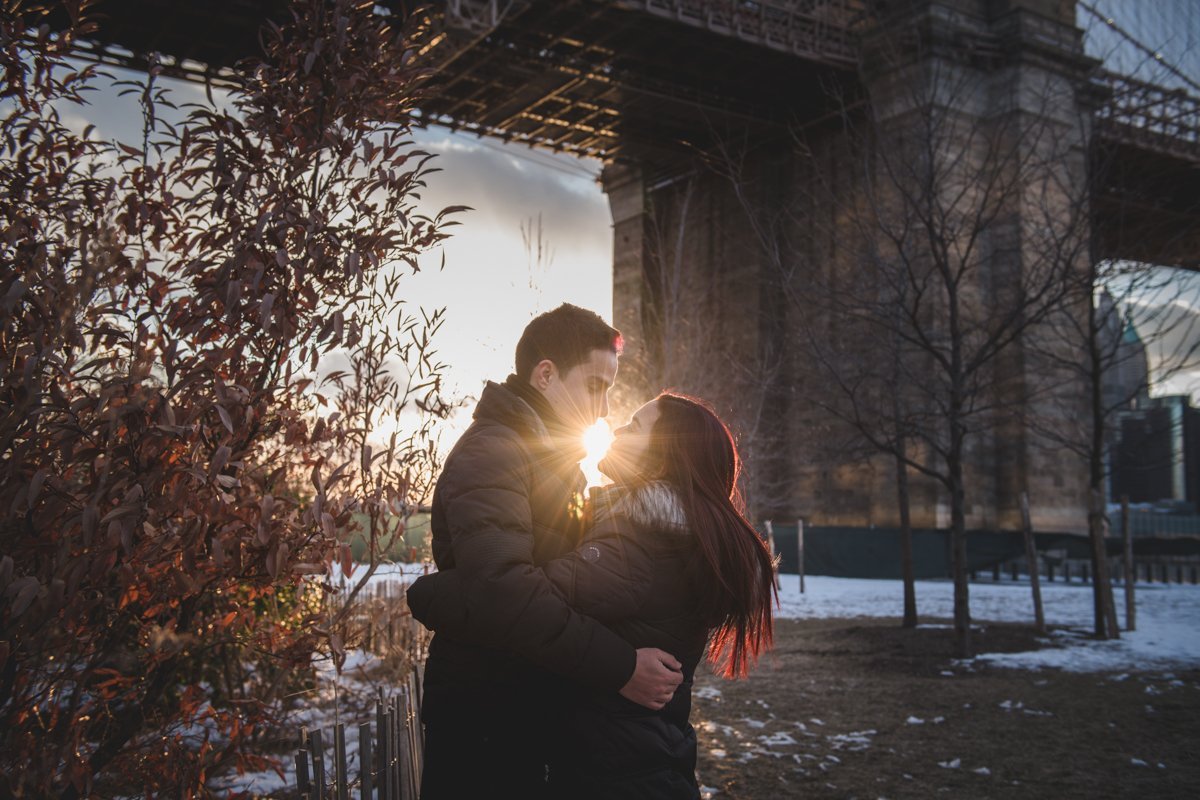 Giancarlo had contacted via email from his home in Ecuador. Maria and he would be vacationing in New York City the first week of March and he wanted to know if I could discreetly photograph him popping the question. I was immediately impressed with Giancarlo’s thoughtful and romantic vision. He saw a Brooklyn engagement photograph on my Instagram feed and he was interested in using as the location. The area is called Pebble Beach and it is located in DUMBO along the East River in between the Brooklyn and Manhattan bridges. It is a magical spot. Not only does it boast views of both bridges and the Manhattan skyline but the location also coordinates well with the setting sun.

Giancarlo and I set the time for him and Maria to make their way to Pebble Beach at hour and forty-five minutes before sunset. Since Giancarlo lived in Ecuador, we coordinated via email.  I used Google Maps to show him the location visually before his arrival. I marked photos from the location and gave him a couple of options of where to stand in case the park was crowded at that time. I marked where he should stand, where I would be standing and the direction he should turn when proposing to Maria. I wanted to be sure that the Brooklyn Bridge and the sun would be in the background.

It seems like these directions would be easy enough. However, because the person proposing is more than likely nervous  things may not go exactly to plan.   I know this first hand.  I photographed a surprise marriage proposal and engagement session before, and despite some direction, the groom ended up turning his back to me at the last second.  All my shots were blocked. Yes, I want you to be in the moment when you propose.  However, the more clarity you have beforehand the easier it will be to get caught up in the moment.

I arrived a couple of hours early to go over the locations. I live about two hours from Brooklyn and wanted to make sure I got there early in case of traffic. We also intended on doing an engagement session immediately following his surprise marriage proposal.  I wanted some time to walk through the DUMBO area and brainstorm locations, see the light and make sure there was not something unexpected that would impede the proposal. It was also extremely cold that day.  I then took the time to plan their engagement photos along a walking route that had quick and easy shelter from the cold.  This early March day was one of the coldest I experienced all winter. I must say that although Giancarlo and Maria are from Ecuador where the weather is less extreme, they never complained.

Giancarlo and I also talked about the schedule in detail before his Brooklyn surprise marriage proposal date. Yes, we coordinated a time for him and Maria to arrive but we also had to consider what to do should he or I run be running late or they were a little early. We, therefore, planned on me arriving 15 minutes early and waiting for a half-hour after our scheduled time for them to arrive – no matter what.  I knew trying to get someone to an exact location at an exact time could be difficult – especially when trying not to give away the surprise. Giancarlo and I also devised a simple way of texting each other should he be late. Again, we did not want to make his girlfriend suspicious with texts on his phone.

Giancarlo also directed me to photos of him and Maria online so I could be familiar with their faces. I asked Giancarlo to walk his girlfriend along a certain path to the designated Brooklyn surprise proposal location. This way I could immediately see them coming. I let Giancarlo know that I would have my camera out and would be pretending to photograph the skyline.

I had hired a second photographer for the day and we were both in place at Pebble Beach when I saw Giancarlo and Maria approaching. I assumed the role of tourist and began photographing the skyline while slowly inching my way to them. Giancarlo and I caught each other’s eye for a brief second and acknowledged each other. Giancarlo then guided Maria to a rocky part of the beach.

I moved away from the police officer and continued to photograph the skyline and waited for Giancarlo to resituate himself and Maria on an unrestricted area of the beach. Giancarlo lured Maria into the spot claiming that it was a famous selfie location and begin to take photos of themselves. I moved closer and closer and then Giancarlo reached into his pocket again and popped the question without delay. I begin snapping away and then I heard Giancarlo say as he pointed to me, “This is Christine” apparently Maria saw Giancarlo texting me earlier and was a little suspicious. We then had a good laugh as I introduced myself. I then ushered them out of the cold to warm up and regroup and then into our Brooklyn engagement session.

Photographing Giancarlo and Maria’s Brooklyn surprise marriage proposal engagement photos was exciting. I was moved by Giancarlo’s wish to romantically and thoughtfully propose to Maria.  I was impressed with the way Giancarlo trusted me, all the way from Ecuador, to help make it all possible. I then drove Maria and Giancarlo back to their Air BnB and made my way back home. I was filled with joy on the way home touched by how sweet and kind Giancarlo and Maria were and completely in love with my job. 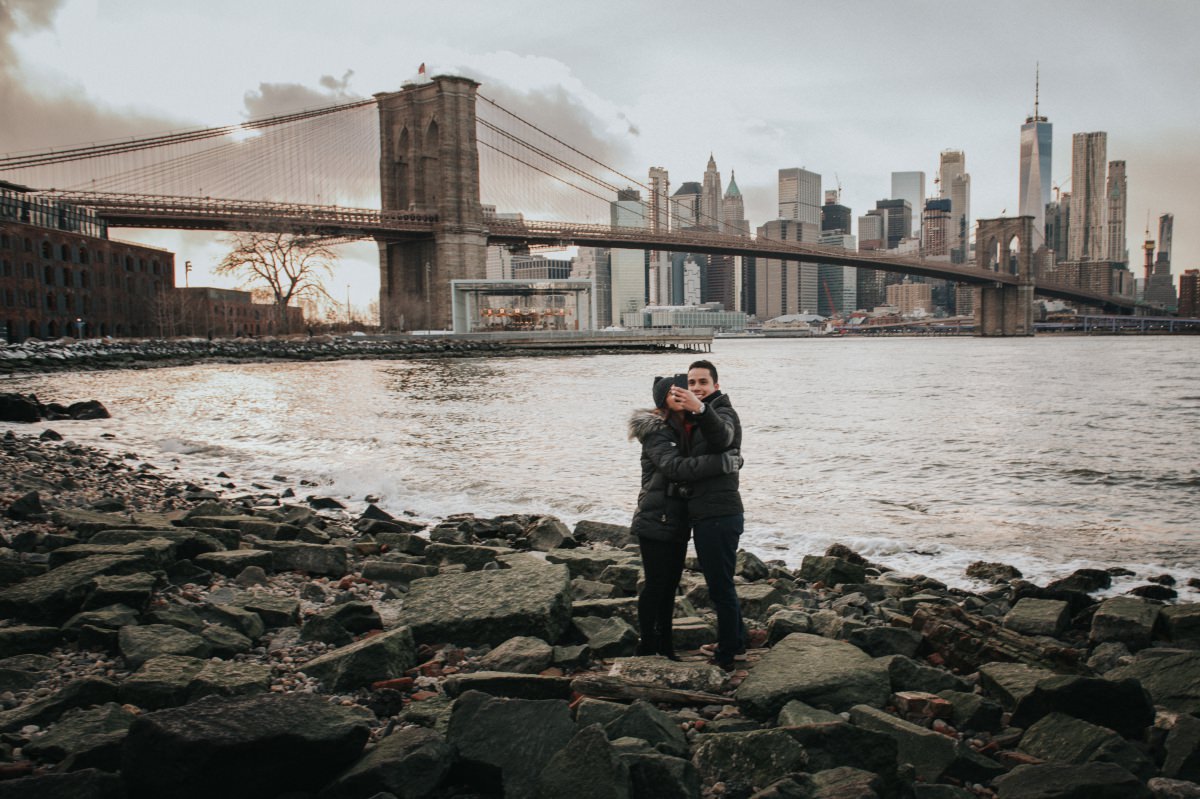 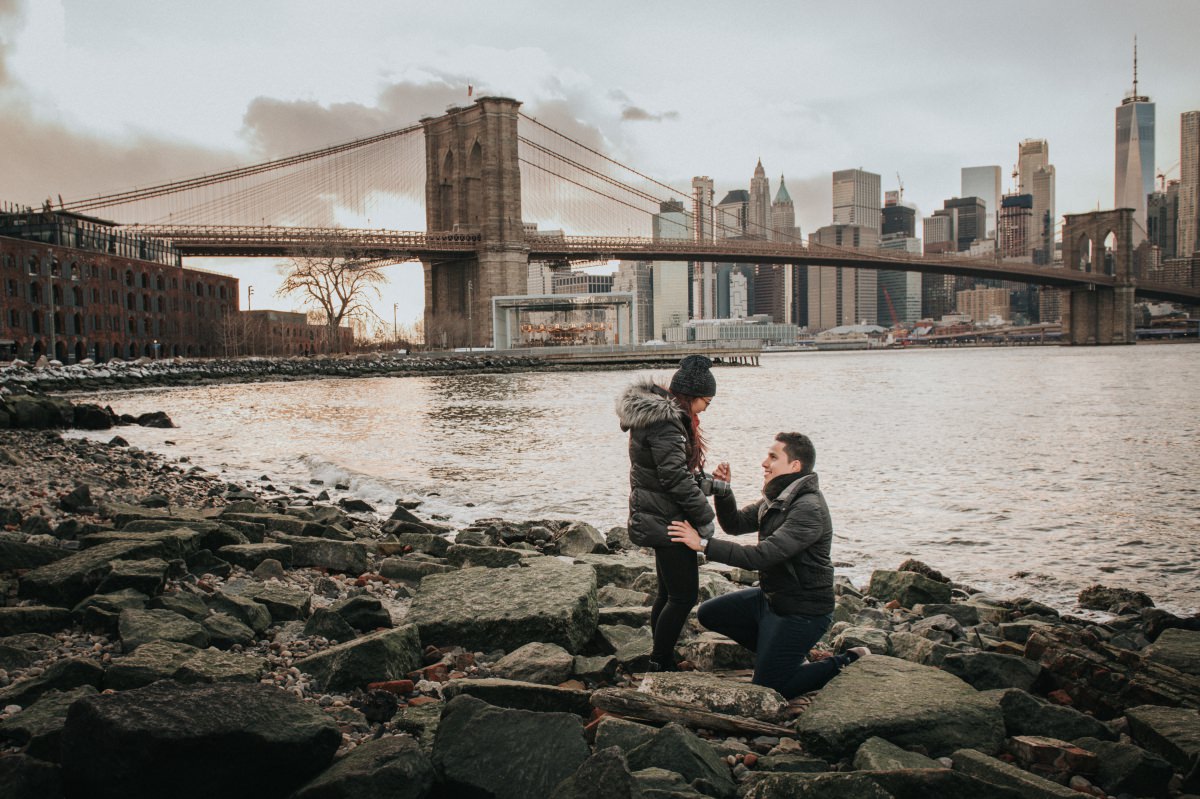 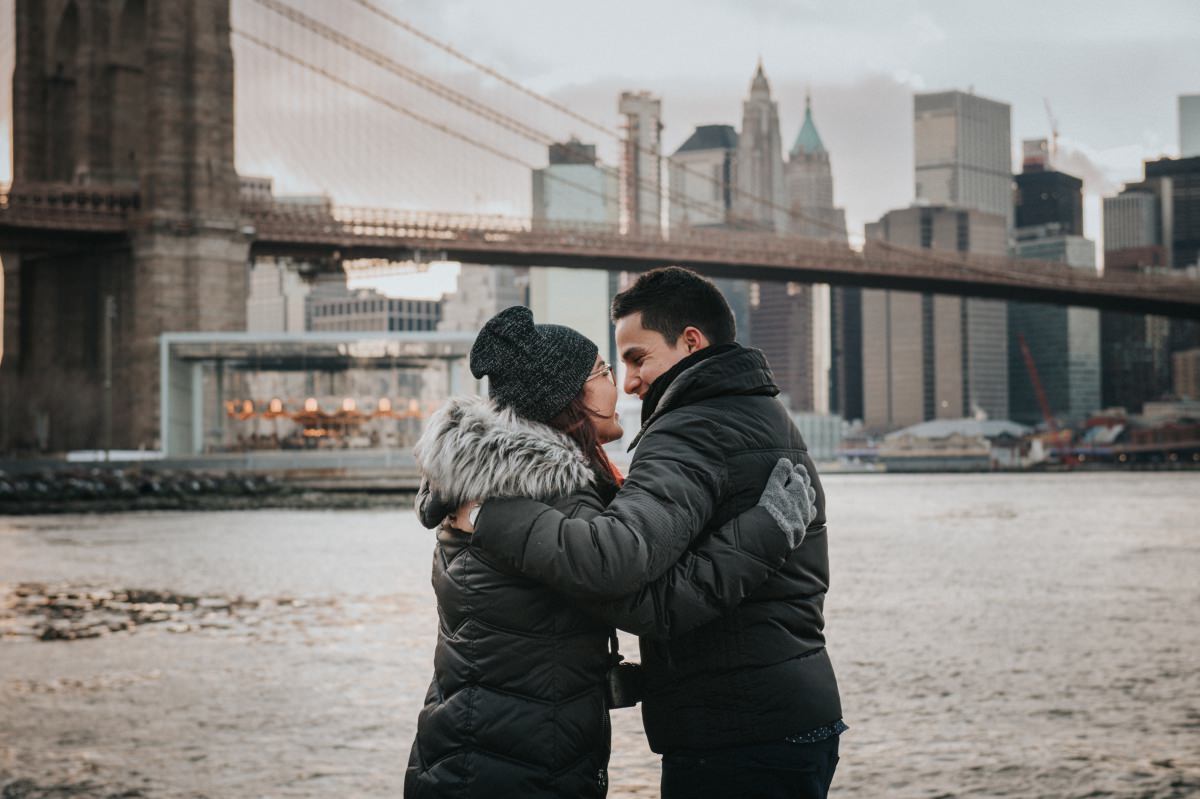 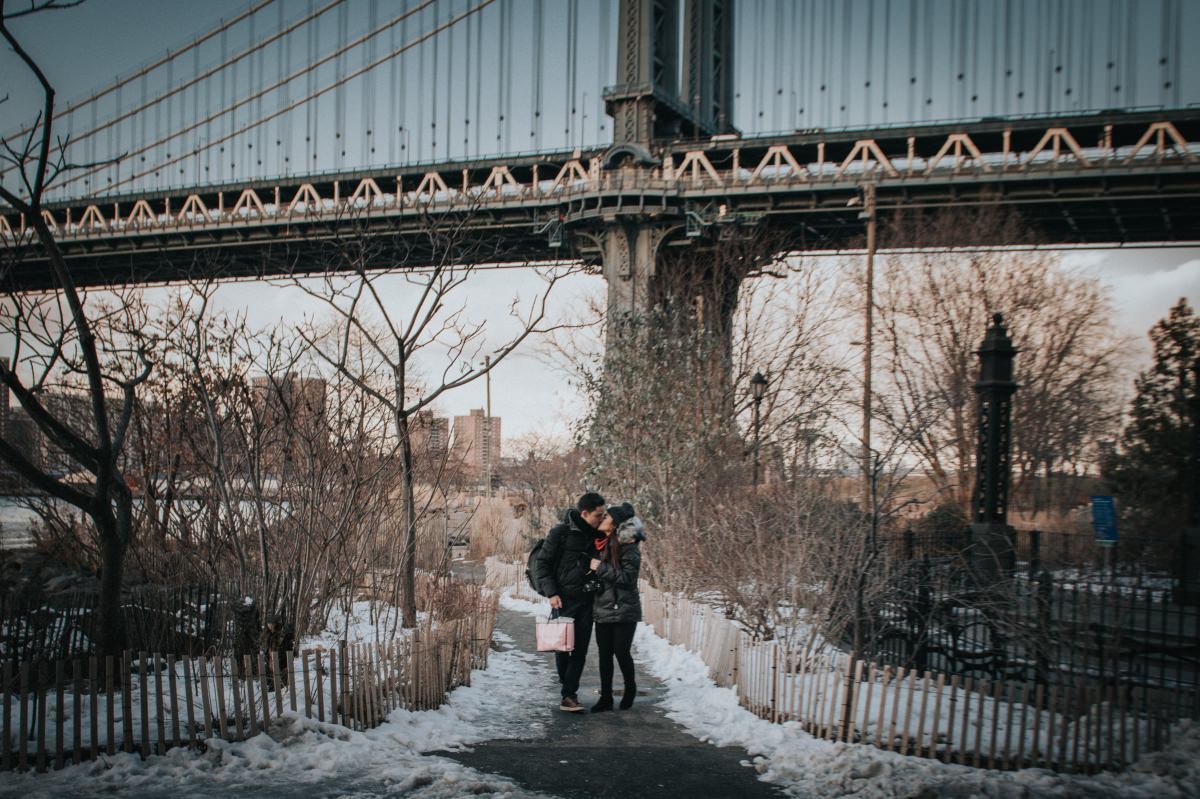 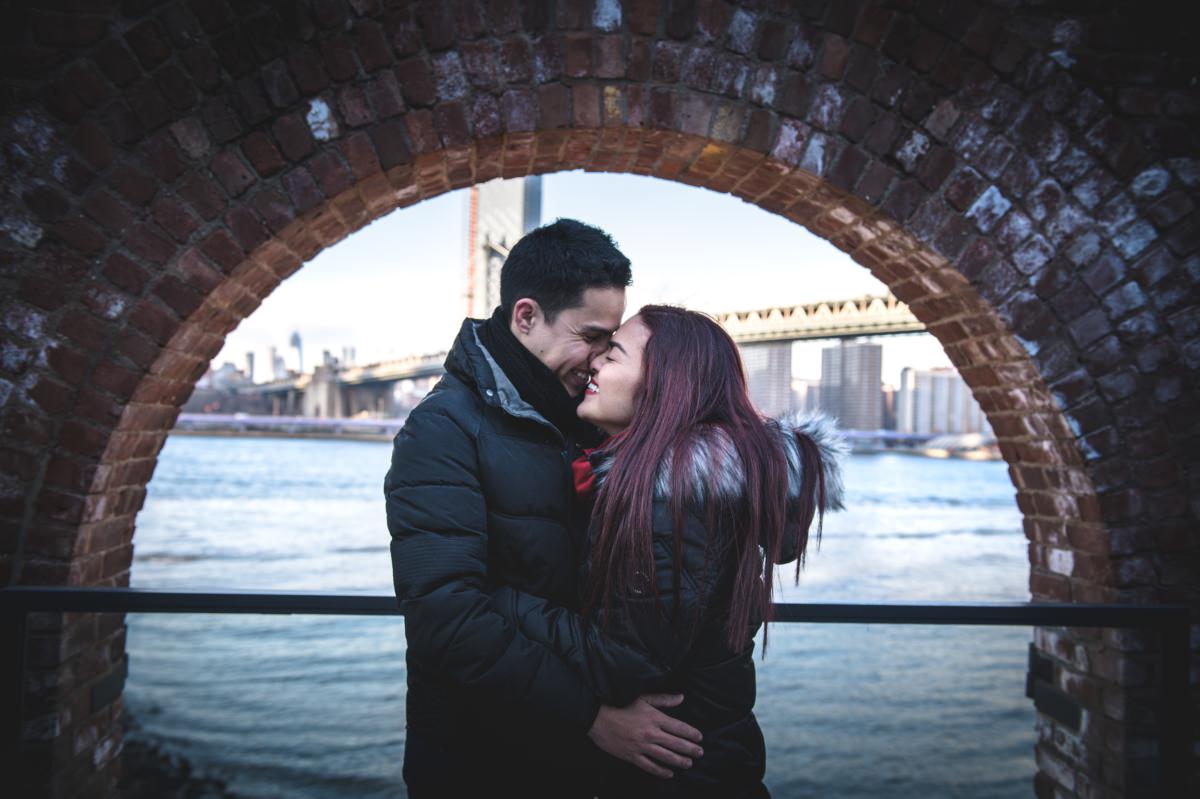 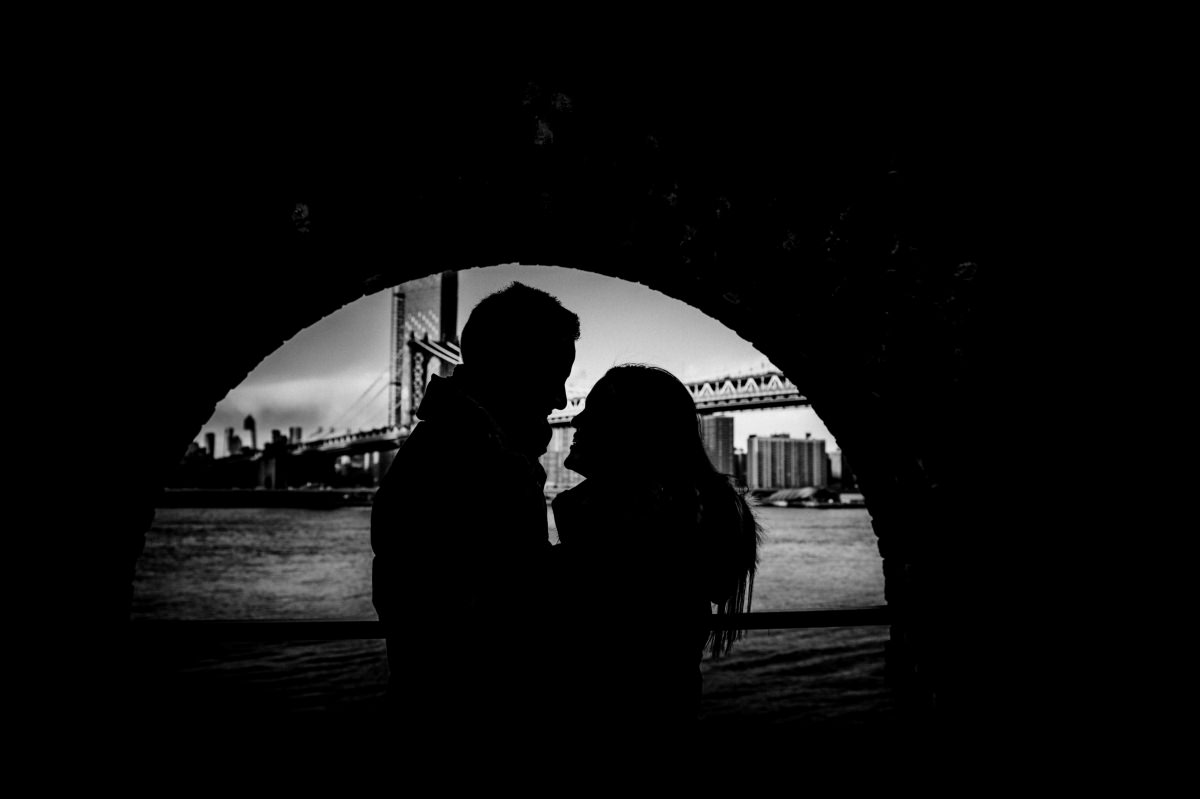 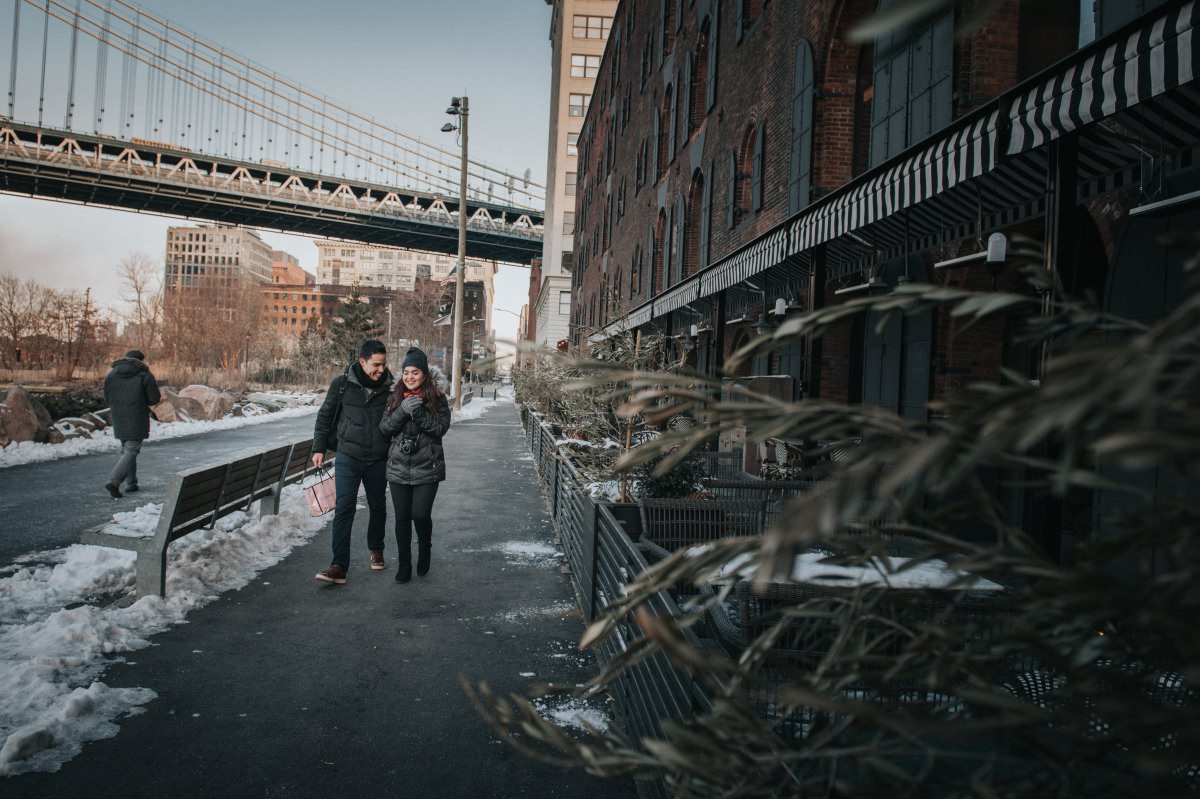 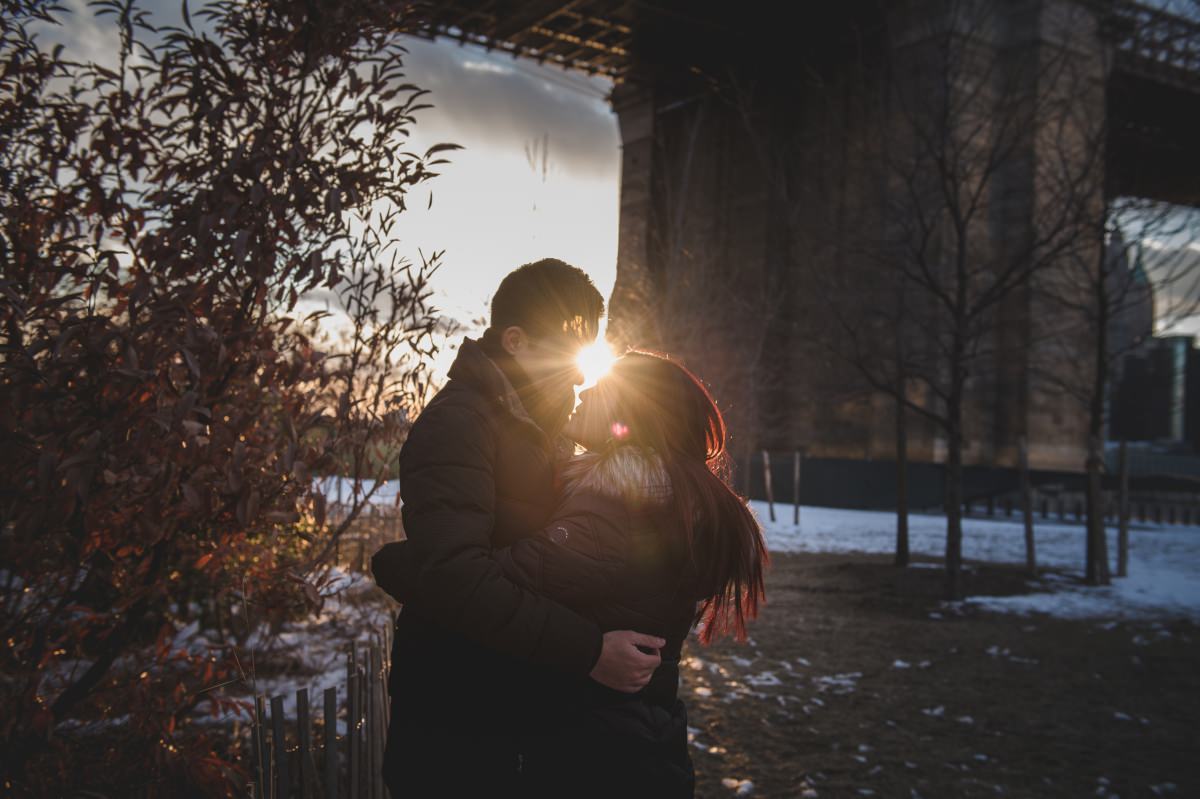 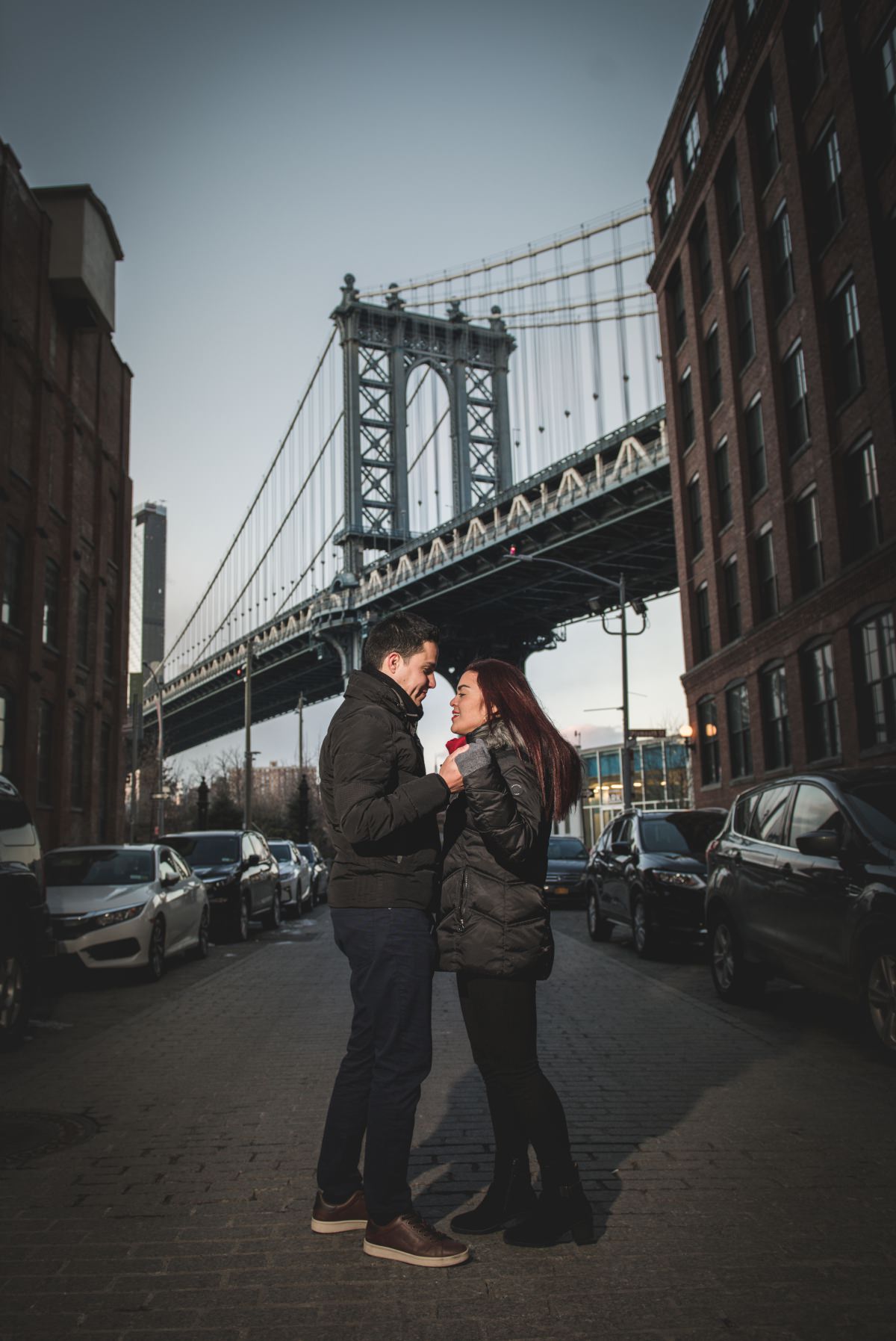 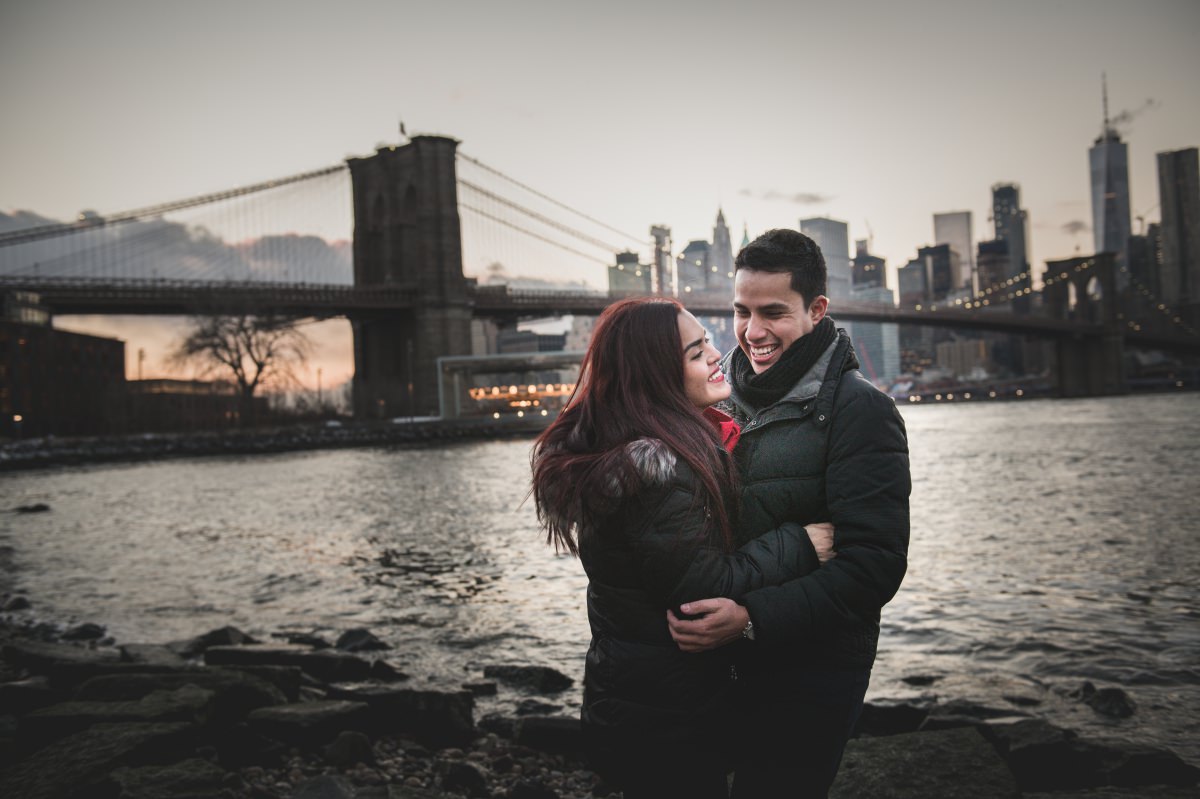 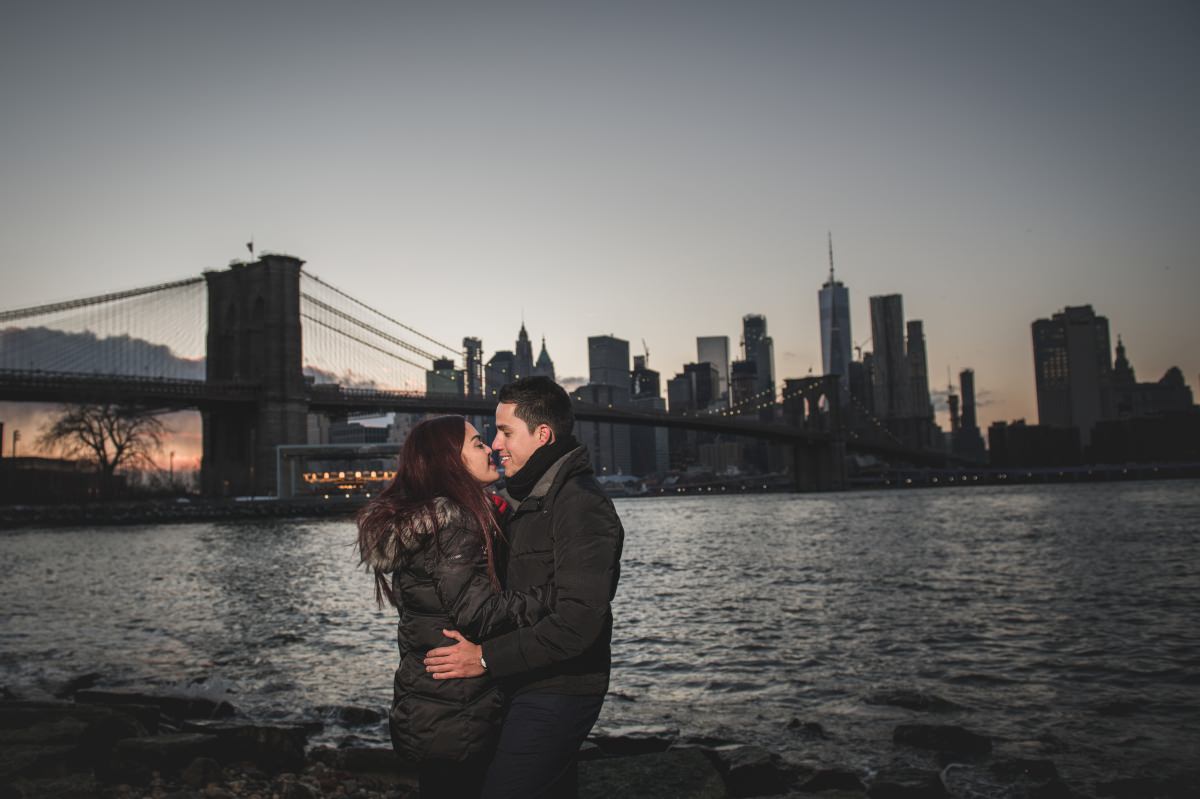 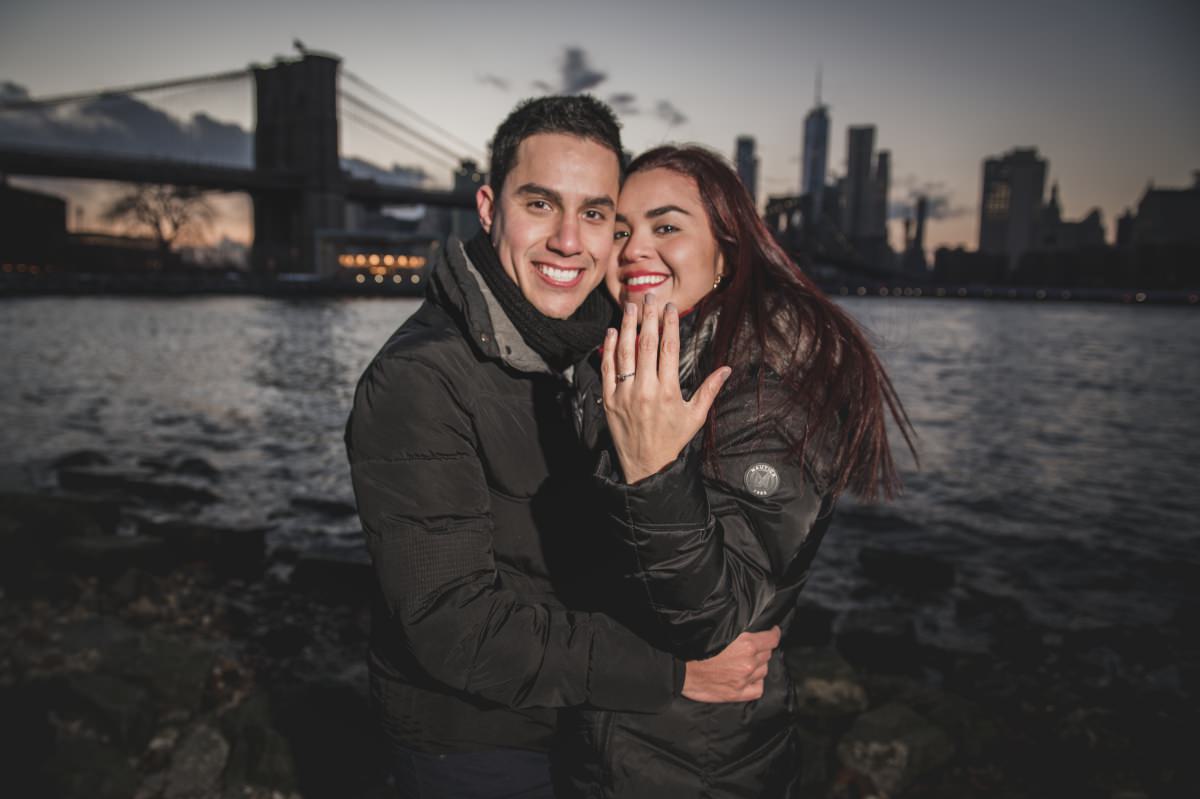